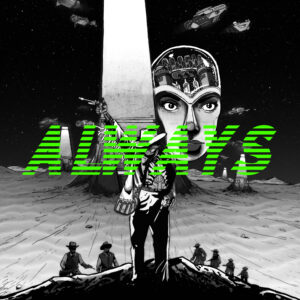 Recorded and released during the 2020 COVID-19 Pandemic
All proceeds to benefit MKEBlack.org

Written and produced by Nick Woods

They came alive on the carpet of a jungle in a time past, present, or future – who’s to know?

Standing at her side was her Partner, made of metal, staring through the plastic straight into skull, eyes permanently wide

They’d awoke by the programmed will of The Prophets, long since buried and burned – like the future they’d promised

They’d never met a soul face-to-face on this scorched earth covered in mold – their only human touch was pushed through a screen, just characters in digital paintings

But still they felt the tick-tick-tick get louder and louder as their sick tired mind got a little less crowded and the days turned into nights, while sunrises and sets blurred together

Towering tall out on the plane, it took their breath away
And she felt the same thing they all felt when the long and awful story was finally over

So like always, they kept walking, marching toward that thing they’d felt spinning in place like an orbiting atom

When hope is at a climax it make the letdown too hard to handle
Is it too much temptation to swallow?
And is it worth it for choking when eating?